I really love the creations from Camp Steelhead after I picked up the floating dock from the Home and Garden Expo this year.  They just released the Rocky Mountain Hot Springs.  While I used it in a tropical theme I will explain the meaning behind the creation.
The designer states, “In the Western United States is a geological region known as the Rocky Mountains. Here is where two great tectonic plates join forming the landmass of North America, stretching from Canada and down into Arizona and New Mexico. Along what is known as the Continental Divide, are thousands of small geothermal springs with the most significant being in Yellowstone Park. Many are near public area and are extremely well known such as the ones in Ophir, Colorado. Others are hidden well in the mountains and often feed streams. Often appealing to hikers looking for solace in the mountains, these secluded hot springs where the inspiration for this build.”  This version has over 300 adult and non-adult animations that are bento except for a few surprise static poses thrown in for fun. It comes with a seasons HUD that controls the plants and rocks.
I also used a Fence Set by B-Made to cordon off the area since it can be dangerous.  This is currently being offered at the new round of Boardwalk.  Since my hot springs is tropical you can only get to it by the Narrowcreek Rowboat by Raindale.  It has three versions including a rowable version which you can rez on water either linden or prim/mesh and roam around. The static boats have ten solo and seven couples animations. 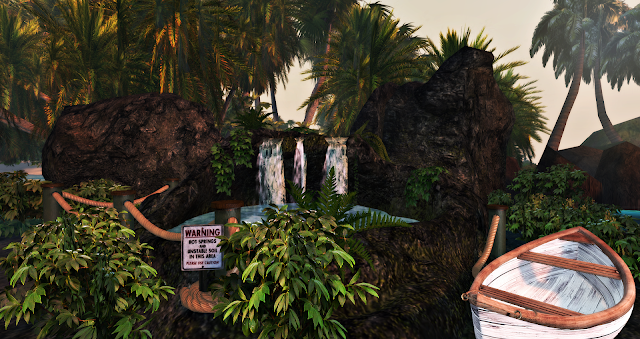